The natural path of the Toxa waterfall – Carboeiro Monastery is located in the councils of Silleda and Vila de Cruces in the district of Deza. You enter the beginning of the route from the village of A Bandeira, located on the N-525 road, linking Ourense to Santiago de Compostela. Then, from A Bandeira, you must go to the parish of Pazos via the PO-204 road which goes to Merza and Vila de Cruces.

This area, due to the high concentration of the natural communities it conserves, participates in the European Natura 2000 network and is part of the Site of Community Importance Ulla-Deza river system.

Its length is about 6 km where, after contemplating the 70m drop of the Toxa waterfall from numerous vantage points, you descend to the foot of the fall to accompany the Toxa River in the final metres before it flows into the Deza. Cross the river by the iron bridge to reach the hermitage of San Paio and later the town of Merza. Continue until the A Carixa,river beach and after a climb of some difficulty, we turn to the right to the hamlet of Portela, although we could shorten the journey if we continue up the road towards Baños da Brea spa and thus, link up with the old Brea road which leads to Carboeiro Monastery.

Once at the hamlet of A Portela, we follow the path parallel to the river, as marked by the signs until we find the medieval road which crosses the medieval bridge, rebuilt several times, also called Ponte do Demo (Devil´s Bridge), and that finally lead us to the Benedictine monastery of San Lourenzo de Carboeiro, founded in the 10th century, considered the best example of transitional Galician Romanesque, also called Gothic Romanesque.

This route is considered of short distance (PRG 18) and has signage to indicate the right path. 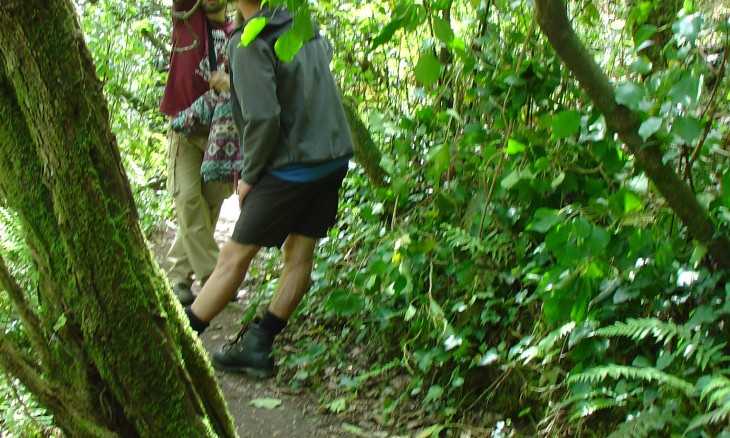